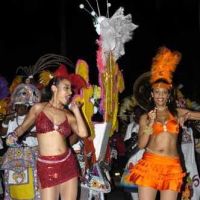 Nassau
Rejestracja: 2007-11-20
"It is what it is!
Punkty41Więcej
Następny poziom:
Ilość potrzebnych punktów: 159
Ostatnia gra

A blonde teenager in Springfield , Ohio ,

wanting to earn some extra money for the summer,

decided to hire herself out as a "handy-woman"

and started canvassing a nearby well-to-do neighborhood.

the owner if he had any odd jobs for her to do.

"Well, I guess I could use somebody to paint my porch,"

he said, "How much will you charge me?"

Delighted, the girl quickly responded, "How about $50?"

The man agreed and told her that the paint brushes and

everything she would need was in the garage.

The man's wife, hearing the conversation said to her husband,

"Does she realize that our porch goes

ALL the way around the house?"

He responded, "That's a bit cynical, isn't it?"

The wife replied, "You're right.

I guess I'm starting to believe all those dumb blonde jokes

we've been getting by email lately."

Later that day, the blonde came to the door to collect her money.

"Yes, the blonde replied, and I even had paint left over,

so I gave it two coats."

Impressed, the man reached into his pocket

"And by the way, "the blonde added,

LET US ALL PRAY FOR OUR BROTHERS & SISTERS IN HAITI. GOD BLESS THEM ALL.

Do you hear me,
I'm talking to you
Across the water across the deep blue ocean
Under the open sky, oh my, baby I'm trying
Boy I hear you in my dreams
I feel your whisper across the sea
I keep you with me in my heart
You make it easier when life gets hard

They don't know how long it takes
Waiting for a love like this
Every time we say goodbye
I wish we had one more kiss
I'll wait for you I promise you, I will